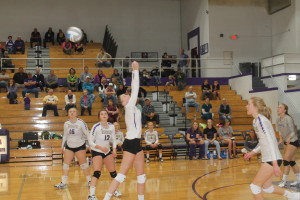 “It was senior night and our last regular season home match so the girls came ready and focused to play,” said coach Jaime Keiser. “We were aggressive and did a great job of attacking the ball which kept Chamberlain on the defensive end. We played three consistent games which is nice to see with only a few weeks left of the regular season. I am proud of how we played together as a team,” said the coach.

The Lady Warriors will host the SESD tournament this Saturday in the Winner Armory.