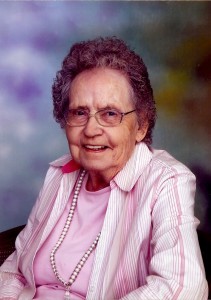 Vola Alvera Eubanks was born on March 12, 1919, in Jordan, SD in Tripp County to Nelson and Anna (Hauf) Rash. She went to a rural country school through the eighth grade.

Vola met Francis Worden and they married at the Immanuel Lutheran Church in Jamison, NE on July 13, 1943. To this union three children were born and they raised them on the farm near Colome, SD. In July 1963 Vola moved to Hot Springs, SD where she worked as a baker for the Hot Springs school system. Francis joined the Lord in 1975.

Vola met and married Roger Eubanks on September 27, 1976 and continued to live in Hot Springs until 1981. They moved to Colome in May 1981 so Vola could be close to family, friends, and grandkids. Roger passed in 2010.

Vola moved to the Elder Inn in Winner, SD in December 2005. Vola always had a smile for everyone. She spoke high praises of the Elder Inn staff and the great care she received. Vola enjoyed playing cards and seeing her grandchildren. She demonstrate a strong faith in God and lived the philosophy that love binds people together.

Vola departed this life on August 8, 2017 at the Avera Rosebud Country Care Center in Gregory at the age of 98.