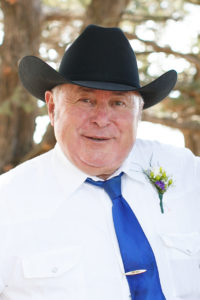 Funeral services for Vince Svoboda, 81, Iona, were held on June 15 at the Methodist Church in Gregory. Burial was at the Iona Cemetery.

Vincent Anton Svoboda was born on April 21, 1937 in Gregory, SD to Joe and Theresa (Dite) Svoboda. The third of six children, Vince was brother to Franklin, Marilyn, Gwendolyn, Eleanor, and Joan. Vince lost his baby sister, Joan, shortly after birth, and his mother, Theresa, followed just months later. Vince’s family grew when his father married Elsie Christensen in December of 1953, and he was proud to gain five siblings, Donald, Robert, Joan, Melvin, and Marvin (Short).

Vince grew up in the Dixon area and later moved to Iona with his family in 1956. As a child, Vince developed a love of horses and spent many happy years wild horse racing with good friends, Charlie Kennedy and Warren Hammerbeck, roping, and working cattle. He was the rancher of the family and took great pride in raising Hereford cattle and Quarter Horses.

In 1980, Vince met Linda Strand from Mitchell, SD through his good friend, George Hammerbeck. Vince and Linda were married on March 6, 1982. They welcomed daughter, Jami, in March of 1983 and son, Bart, in September of 1984. A few years later, Vince acquired his other son, Rod Whitney.

Vince had a generous spirit. He was well known for gifting horses or calves and sharing the great love he had for his animals. If you were lucky, he may have gifted you with a hard fought for pie from a local benefit auction. (If you were unlucky, you were bidding against him for that pie, and you were never forgiven) He very much enjoyed visiting neighbors, friends, and family, and was often found socializing in town at dinnertime.