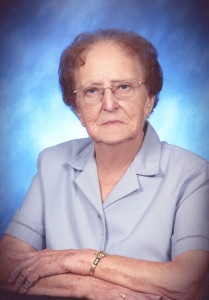 Vernie was preceded in death by he parents Albert and Myrtle Blomstrom, her husband Albert, daughter Brenda Mahoney, and her sons Doug Pederson and Clay Pederson.

Vernie had a strong faith and belonged to the Catholic Daughters.

For several years she enjoyed helping prepare meals on Fridays as a member of the American Legion.

The family will be directing memorials to the Immaculate Conception Catholic Church in Winner, SD