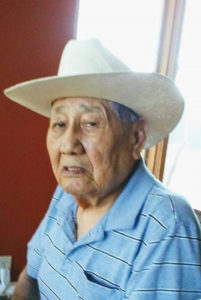 Victor was united in marriage to Lucille Roubideaux in March of 1949 at the Episcopal Church in Winner. He was the oldest of five children and a direct descendant of Chief Asanpi (Milk).

Victor moved to Winner where he called home for the majority of his life. He and Lucille would have four children: Rose Melda (Wendel), Edward Charles, Verlyn Victor, Jr. and Violet Marie. Always a family man, he worked various jobs around the area to support his family.

Victor was an active member of the Episcopal Church in Winner. He was known very well and respected throughout the community as a hard working painter and carpenter. His family would describe him as a fun loving man who always put his family first. He loved going to rodeos, attending powwows especially Milk’s Camp, fishing, camping, and mostly spending time with his grandchildren after he retired.