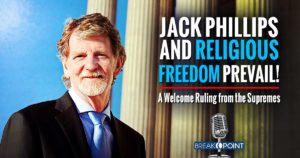 “I’m proud to have stood with my fellow attorneys general to take a stand for religious freedom in this historic case,” Jackley said. “This is a victory for South Dakota, and I will continue to fight for the rights of all Americans to express their faith.”

Jack Phillips, the owner of Masterpiece Cakeshop, appealed a state court decision he lost after he declined to create a cake because of his deeply-held religious belief that marriage is the union of one man and one woman.

The Court recognized, the Commission’s treatment of Phillip’s case violated the State’s duty under the First Amendment not to base laws or regulations on hostility to a religion or religious viewpoint.

South Dakota joined a 20 state coalition of Attorneys General in an amicus brief in September 2017.