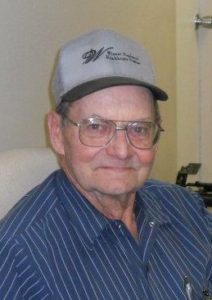 Tevis was born Oct. 12, 1936 to Dale and Betty McIntyre in Gregory, SD. He grew up the eldest of five children. Tevis attended Gregory High School through his junior year. He graduated from Washington High School in Sioux Falls, SD in 1954.

Tevis went on to attend the University of South Dakota in Vermillion where he majored in accounting. In 1957, Tevis moved from Vermillion to Denver, CO where he worked and continued his education. Tevis was later presented with an opportunity to work in the accounting department for Boeing in several different locations including Grand Forks, ND, Cheyenne, WY, Rapid City, SD, Santa Maria, CA, and Washington, DC.

In 1966, Tevis decided to be closer to family and moved back to Gregory, SD to work on the family farm before settling in Winner. Tevis was self-employed owning a car wash and Laundromat, and doing lawn maintenance. In December 1984, Tevis began his long-term employment with the Winner Regional Hospital as a night watchman before being promoted to the maintenance department. On Oct. 30, 2015, at the age of 79, he retired from the Winner Hospital after 31 years of service.

Tevis enjoyed spending time with family, taking pictures, and collecting memorabilia. He was an avid traveler, visiting every state except Hawaii and Alaska, as well as travels to Canada and Mexico. He enjoyed attending the Sturgis Rally every summer and spending his winters in Arizona. Tevis was also a member of the Winner Historical Society.

Tevis was preceded in death by his parents, Dale and Betty; his brothers Donald McIntyre and John McIntyre, and his sister Betty Ann (Annie) Marts.

Funeral services are scheduled for 11 a.m. on Saturday, April 14, 2018 at the United Methodist Church in Winner, with a luncheon after the services. Following the luncheon, the graveside service is scheduled for 2:30 p.m. at the Gregory IOOF Cemetery. There will be no viewing as cremation has taken place. Family will be greeting friends on Friday, April 13, 2018 from 6 p.m. to 8 p.m. at the United Methodist Church in Winner. Memorials may be directed to the family for designation.