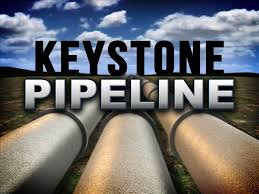 The Associated Press reports an attorney battling the project says the “fight is not over.”

But the high court said in a ruling last Wednesday that justices didn’t “reach the merits of the case” because he lower court didn’t have jurisdiction to weigh the appeal of the Public Utilities Commission’s decision.

“That’s really disappointing that the court didn’t reach the merits, because the risk to South Dakota’s land and water resources is clearly there,” Martinez said. “It’s a shame that they did not get a closer look by the court.”

TransCanada spokesman Terry Cunha said in an e mail that the pipeline developer is pleased with the court’s decision.

Keystone XL would cost an estimated $8 billion. The 1,179-mile pipeline would transport up to the 830,000 barrels a day of Canadian crude through Montana and South Dakota to Nebraska where it would connect with lines to carry oil to Gulf Coast refineries.

A portion of the pipeline will run through Tripp County.

TransCanada announced in April it as meeting with landowners and starting aerial surveillance of the proposed route. The company hopes to begin construction in early 2019.

The Cheyenne River Sioux Tribe, Yankton Sioux Tribe and Dakota Rural Action appealed to the South Dakota high court after a judge had affirmed state regulators approval of the pipeline.

The PUC initially authorized the project in 2010 but the permit had to be revisited because construction didn’t start within the required four years. The panel voted in 2016

to accept TransCanada’s guarantee that it would meet all conditions laid out by the commission when it first approved that state’s portion of the project.

Cunha said the company is working to get needed land easements for the pipeline in Nebraska.