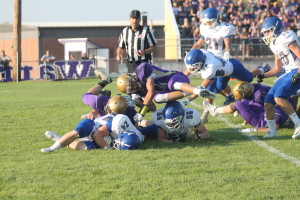 “We knew they were going to be a good football team and we were going to be challenged,” said Winner coach Dan Aaker.
The coach noted the first quarter the Warriors were in kind of a reaction mode all the time. “We cannot do that, we have to be focused and ready to go. We let some plays affect us.

“It was all mental. They did not do a thing we did not expect them to do. We were not getting lined up right and were not reading keys,” added Aaker.

The Chargers struck early. Winner muffed a punt and the Chargers recovered on the Winner 24 yard line. Two plays later, Jacob Just scored on a 1 yard run to give the opposing team an 8-0 lead.

Winner responded with a 10 play drive to the Charger 28 yard line but turned the ball over on downs.

The Warriors had a nice screen play to move the ball only to fumble and give it back to the Chargers. Sioux Falls Christian then scored on a 1 yard run giving them a 24-0 lead.

“That was a huge chain of events,” said Aaker. “We went from a great defensive stop to hopefully getting a drive going to giving them the ball back.”

Just before he half the Warriors got a break, forcing a punt and downing it on the Chargers 1 yard line. On the next play, Elijah Blare recovered a fumble in the end zone to put the Warriors on the scored board.

At the half, Sioux Falls Christian took a 24-6 lead. That was all the scoring there was for the rest of the night as the second half of the game was defensive battle.

The Warriors had 102 yards in total offense. The Chargers had 317 yards rushing.

In passing, Winner quarterback Carter Brickman was 4-8 for 28 yards.

Aaker said in the second half the Warriors battled hard defensively. “We could have easily rolled over and let them steam roll over us but we kept fighting.”

The coach said the Warriors have to get a lot better in a lot of areas. “Now it is the challenge to come back and get ready for Stanley County.” The Warriors will travel to Stanley County on Friday, Aug. 25. This will be an SESD conference game. Stanley County defeated Mt Vernon-Plankinton Thursday night.

In practice, Aaker says the team has to get back to more fundamentals. “We really have to focus on the mental side of being aligned and being ready to go every single snap. Offensively, we have to solidify some stuff on the line and be better blockers.”
Aaker says the road is not going to get any easier as Winner takes its first road trip on Friday.