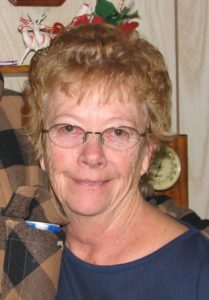 Shirley was born at home November 11, 1938, delivered by a midwife to Clifford and Sadie Sherman. The midwife arrived with a large doctor’s bag, and Shirley’s sister Louise, two at the time, insisted that the midwife take that baby and put it back in her bag and take it with her.

As Shirley grew up she developed an outstanding happy and bubbly personality that resonated to family and friends. She brought joy and laughter wherever she went.

Sewing club was something that Shirley enjoyed and developed life-long friendships, while working on projects, each member taking turns sponsoring and providing some special home baked treats.

When she first came to the ranch, Elmer’s little brother, Earl, and sister, Ruby Mae, were just eight and nine. They loved to spend time with Shirley, having great times swimming, horseback riding and the infamous “Jeep Rides”. Their goal was “To go where no man had gone before!” It was just a bit hair-raising for visitors that were victims of these rides.

Devoted loving wife and Mom, she was always my best friend. Dad loved her by his side helping with field work, animal husbandry, fixing fence and care giver to Elmer’s parents as they grew older. Mom and Dad also fostered a niece, Diane, until she went to live in Arkansas with her Dad, Victor Pigg. Later, they fostered a nephew, Kenny Castle, from Redwood Falls, Minn, until he graduated from White River.

Besides all that, Shirley had a huge garden, providing so many wonderful vegetables that would be canned or frozen. Whole tomatoes, juice, pickled beets, and canned green beans were in the pantry for winter. She also tried her hand at making sauerkraut; their friend Frank Perry gave her his special antique grater that she treasured.

Mom spent many hours making her own clothing as well as many outfits for Diane, Rosie and myself. I’ll always remember those three matching polkadot dresses!

Later Mom had another talent emerge after a set of oil paints were given to her for Christmas. Her favorite things to paint were beautiful roses, landscapes and some wildlife. Her outstanding ability was painting clouds. She always paid attention to their special beauty and was looking up at the clouds. Eva Sedlacek, one of Shirley’s best friends, noticed too and laughingly said, “Shirley your head is always in the clouds!”

Grateful to have shared our lives with Shirley are daughter, Bonnie Brahms, (Eric); Their daughter, Heather Brahms, her children Austin and Alexis Brahms; their son, Brandon Brahms (Mercedes) and his child Levi Brahms. Sisters-in-Law, Ruby Mae Astelford and Phyllis Castle; Brother-in-Law Victor Pigg and many nieces and nephews.