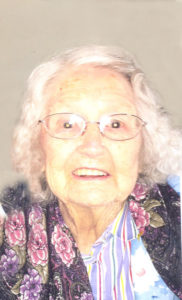 Funeral service were held on Sunday, April 15, 2018 at 2 p.m. at Trinity Lutheran Church in Winner. Burial was at 1 p.m. at the Winner City Cemetery on Monday April 16.

Ruth Marie Kahler of Colome, South Dakota was born Dec. 26, 1919 daughter of Martin and Johanna (Hansen) Rajewich of Gregory, South Dakota. She attended the Lapour School north of Gregory South Dakota till March of 1929. The Rajewich’s moved from Gregory to northwest of Witten South Dakota. Marie went to South Curlew School and worked for different people. She was united in marriage to Fred Kahler on May 6th 1941. They worked out the first year of their marriage, and then moved south of Winner, South Dakota. They worked for neighbors. They had two children, Verna Marie Mayer and Richard James Kahler.

Marie Kahler liked to crochet, embroidery, and make quilts. She always had a big garden and raised lots of chickens and helped milk cows. She also helped work in the fields. She loved to play cards and other games with her grandchildren and friends.
Marie Kahler was baptized and confirmed at Saint Paul’s Lutheran Church, south of Colome.

Marie Kahler was preceded in death by her husband Fred Kahler and her son Richard James Kahler, Dell Mayer son in law, and one sister Ruby Miller and brothers Mervin and Clarence, Martin and Walter, Don and Donald Rajewich. She leaves to mourn her daughter Verna Marie Mayer and 3 grandchildren; Valerie Jo Benko, John and children, Luke and Patrick, Vicki and Chad Moser and children, Mark and Michael O’Rear, and Tina Espinoza Miller and John Allan, Austin and Jill Moser, Aspen and Jon, and Layne. Many Great Great Grandchildren and one Grandson Alan Deutsch and Susan and Stephanie Simmons.