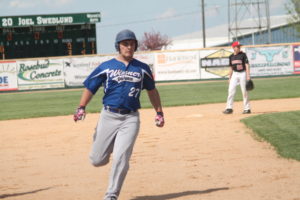 Winner/Colome baseball team jumped to an early lead and went on to win 11-1 over Chamberlain/Kimball/Lyman in a Region 4B east division playoff on May 15 in Winner.

Ty Bolton was the winning pitcher as he pitched six innings. He allowed 4 hits, 2 walks and had 5 strikeouts.

“We played pretty solid baseball to kickoff the postseason,” said coach Drew Weber. “Ty threw a great game and we made plays behind him. The whole lineup seemed to smack the ball around offensively and we were able to be aggressive on the base paths,” said the coach.

“It was a solid group effort and hopefully it will continue in the next round,” said Weber.

The super regional was held in Winner on Monday, May 21.