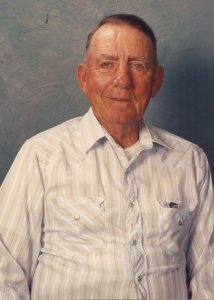 Dick was born November 8th 1935 on a rural farm near Mosher to Boyd & Doshia [Eastin] O’Bryan. Dick was the 4 from youngest in a family of 12, which likely prepared him for a life of sharing. The O’Bryan family moved to a farm south of Winner in southern McNeely township in the mid 1940’s. Dick attended rural elementary school as well as rural church at Danton. Dicks early years were spent enjoying the rural lifestyle involving a large neighborhood and gatherings at Dog Ear Lake which was the social hub for the area.
Dick attended & graduated from winner high school in 1954 his high school years were also spent working at the Westside as well as courting his future wife of 60+ years Mavis Pettit. Dick and Mavis were married at Danton Catholic Church south of Winner on July 7th 1955. The next 60 years were spent enjoying each other as well as raising a family of 5.
Dick & Mavis purchased their home farm south of Winner shortly after marriage and together worked to improve and enlarge that farm Dick spent hours doing custom work as well as wage earner while Mavis took care of the farmstead duties involving milking, hogs, and chickens to assist with income.
Dicks early career years were spent in the auction business which also led to involvement in the local livestock auctions. He spent many hours at the winner livestock auction and actually helped put in one of the first line fences at the present day location. He was also involved with Gregory livestock auction. His work week sometimes involved leaving on Thursday for Gregory, returning late and then spend Friday –Saturday at Winner for sale and loadout.
As a ringman & auctioner, Dick thoroughly believed in the auction way whether it involved selling something for the maximum amount or even finding a bargain he always felt auction was the best way to determine value. He enjoyed meeting people and doing business the exciting auction way.
Dick spent his later career years in the real estate /insurance business which was based upon the many people he had already done business with through auctions. He became a salesman for the Lenker agency in the early 70’s and eventually purchased the business, renaming it “The O’Bryan Agency”. He always enjoyed putting a good deal together for both parties buyer and seller and took pride in his successes.
Dick’s off farm career and success as well as Mavis /family support on farm allowed them to expand and improve their farm from a very meager start to a comfortable yet manageable size and cowherd to match until health forced him into retirement.
Dick enjoyed the outdoors whether it involved hunting, fishing, gardening, or simply checking the cows. He was involved from the beginning with the Clearfield ball diamond and spent many hours in the early years when it was truly a pasture and later with Colome as his children became involved with school activities there. Whether it was coaching, umpiring, announcing or simply watching dick attended many sports activities enjoying a good game and sportsmanship but loving baseball & softball. Dicks early years of sharing with siblings set the stage for the rest of his life. He always seemed to have something to share whether it was garden produce, some eggs, a mess of fresh fish, or simply some help carried him throughout his life, but mostly he enjoyed sharing a story.