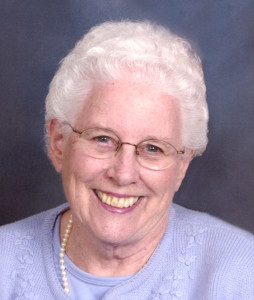 Phyllis was born October 6, 1926 in Seattle, WA, the daughter of William and Elizabeth (Bradfield) Good. She graduated from Kent High School in Kent, WA, the Class of 1945. Phyllis furthered her education at the University of Washington, obtaining a nursing degree. She then worked as registered nurse for two years. Following this practical experience, Phyllis went on to earn her Master’s Degree in Nursing from Columbia University. She was united in marriage on June 30, 1956 at St. James Episcopal Church in Kent, WA to Richard McGinnis. Their marriage was blessed with three children; Paul, Stephen and Dorothy.

Phyllis was a devoted wife and partner with her husband who served as an Episcopal priest throughout his life, working as a missionary in Anvik, Alaska, and as a rector at Trinity Episcopal in Winner, SD, Trinity Episcopal in Watertown, SD, and the former St. David’s Episcopal in Jacksonville, FL. Later in life they worked tirelessly to preserve marriages creating a marriage ministry model which is now used about the country and overseas. Phyllis greatly enjoyed her children, their spouses, her grandchildren and great grandchildren. Phyllis and Richard were fortunate to share many wonderful adventures together, traveling the country. She valued her family, her relationships, her marriage and her Lord most of all.