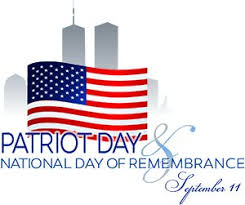 In the United States, Patriot Day and National Day of Service and Remembrance is observed on September 11 of each year in memory of the 2,996 people killed in the 2001 September 11 attacks on the World Trade Center in New York City and the Pentagon near Washington, DC. Of the 2,996 lost that day, 343 were firefighters and 72 were law enforcement officers.

The U.S. Flag is flown at half-staff until sunset on all U.S. government buildings and establishments throughout the world. Individual American homes are also encouraged to display their American flag.

Additionally, a moment of silence is observed to correspond with the attacks, beginning at 8:46 AM Eastern Daylight Time. That is the time the first plane, American Airlines Flight 11, struck the North Tower of the World Trade Center on September 11, 2001. United Airlines Flight 175 struck the South Tower of the World Trade Center at 9:03 AM. American Airlines Flight 77 flew into the Pentagon at 9:37 AM. A fourth plane, United Airlines Flight 93, crashed into a field near Shanksville, Pennsylvania at 10:03 AM after the passengers attempted to subdue the hijackers. Flight 93’s target was believed to have been either the US Capitol building or the White House.

Sponsored by the Winner VFW Auxiliary. Information obtained from Wikipedia