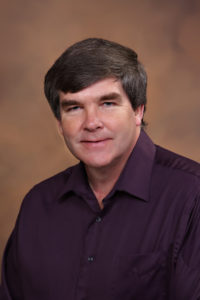 Dan Patmore has a passion for local theater and for his efforts working with students he will be inducted into the Winner School Hall of Fame on April 5. The ceremony will be on the opening night of the Winner High School all-school play at the Winner Community Playhouse. The play begins at 7 p.m.

Daniel Ross Patmore was born and raised in Tripp County. He attended country school until the age of 10 and in 1970 his family moved into town and began running the Coast to Coast store.

While in high school, with the encouragement of Jim Miller (JB) and Don Van Cleave (DVC) he became involved with the theatre group, at that time called the “Thespians.” He found his niche as a member of the technical crew running lights and sound for the plays. Dan graduated from Winner High School in 1977.

Upon graduation he attended Mitchell Area Vo-Tech and earned a degree in electronics. In 1979 Dan moved to Rapid City where he worked for one of the largest printed wire board manufacturers in the country. He co-managed the Coast to Coast store in Sturgis from 1985 to 1989, before returning to electronics until 1997.

In 1997 Dan, his wife Coleen, and their three children; Arianne, Ross, and Samantha, moved back to Winner. Dan and his family helped run the Coast to Coast store with his parents Duane and Velma Jean Patmore. In 2000 the name changed from Coast to Coast to True Value, which Dan and his wife still own and operate.

Within a few months of moving back to Winner, Dan was approached to help with “set stuff” for the upcoming production “Hello Dolly.” He was hooked and in 2001 he tech directed his first Winner Community Playhouse production “Barefoot in the Park.” Dan has been the technical director for nearly every play since that time; approximately 50 productions and nearly 20 years of service.

A few years after “Barefoot in the Park,” Dan was asked if he would be the technical director for the Winner High School Plays. He accepted and soon became a co-advisor for the school’s drama club, “Stage Fright.”

Dan continues to work with the high school productions and the drama club. He has also been seen on stage for some of the community productions with rolls in “Rexes Exes,” “Mamma Won’t Fly;” and most recently, “Dearly Beloved.” He is a member of the Winner Community Playhouse board and is currently president.

Some of Dan’s greatest memories from over the years include building a “glass” atrium for “Savage Dilemma”, constructing a rustic, swamp house for “Sugar Bean Sisters” complete with an outhouse that shoots feathers and smokes because of “spontaneous human combustion,” and playing multiple roles as a cop, a crude, caffeinated truck driver, and a crazy cousin in “Mamma Won’t Fly.”

Dan likes a challenge when it comes to building sets; such as, constructing a spiral stair case in “Lie Cheat and Genuflect,” finding out a way to “hang” a person and how to create a guillotine in “I’ll be Back Before Midnight,” and the many scene changes in the high school production of “Grease.”

Some of Dan’s most treasured moments have been with whom he shares the theater; countless cast members from high school productions; including his three children, community members and volunteers that run the box office, usher, and who donate time and money to the playhouse, the people who encouraged him to be a part of the theater, and of course the audience members, without whom the theater would cease to exist.

“I still think I’m too young to get this award, although I guess I’m not as young as I think anymore,” Dan said.

Well, Dan you’re only as old as you feel and either way you deserve this award. We thank you for sharing your passion and for being a part of what shapes our community and our students though the theatre. Here’s to the memories and many more years together. Dan Patmore Winner High School Hall of Fame.