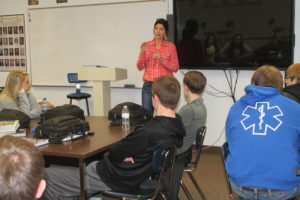 Rep. Kristi Noem spoke to Winner High School government classes Monday morning as she explained her role as South Dakota’s representative in the U.S. House of Representatives in Washington, D.C. Noem also talked about her campaign for governor.

She is in a Republic primary with attorney general Marty Jackley.

Noem has served eight years in the U.S. House of Representatives. In Congress she serves on the ways and means committee. She was one of five representatives from the 435-member House to negotiate the final tax reform deal.

She served six years under the Obama Administration and is now serving under the Trump administration. Now, with a Republican president, Noem says she is at the White House about every week.

In Washington, Noem has a staff of nine and with her offices in South Dakota her staff numbers around 16.

Every weekend she flys back home to South Dakota and attends as many of her children’s school functions as time allows.

Noem and her family operate a ranch in Hamlin County.

Noem says she is running for governor because it was time for her to come home. When first elected in 2010 she said she would not stay in Washington, D.C, for 10 years.

When she is not in Washington, Noem is back in South Dakota campaigning for the primary election on June 5.

As she listens to South Dakotans, Noem hears concerns that there are not enough new opportunities in the state. “Wages are not growing, businesses are not able to expand. They want someone who is going to be aggressive in economic development,” she said.

Noem has a plan to kickstart South Dakota’s economy. She wants to create a foundation upon which businesses can prosper in South Dakota.

“South Dakota does a lot of things right but our economy is falling behind,” she said.

The Republican candidate for governor wants to create new opportunities for South Dakotans to prosper.

A lot of the work will be in workforce development. “The biggest challenges businesses have is they cannot get workers,” Noem explained.

When asked, if elected, what kind of governor would she be, Noem said she would be an interactive governor. “I am used to working face to face with people every day and listening to their concerns. I will be a very hands on governor.”

Noem added that her experience in Washington will help her serve South Dakota as governor. She added that she understands how the federal dollars come to South Dakota.