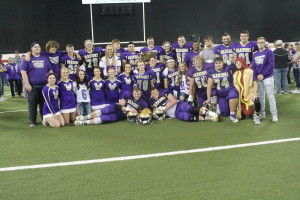 Nine players from the Winner High School football team have been named to the Class 11B all-state team.

The Warriors won back to back state championships and finished with two perfect undefeated seasons for a 24-0 record.

“To get nine players named shows the respect the other coaches from around the state had for our team,” said coach Dan Aaker. “They are all very deserving of this recognition. Post season awards come when you have success on the field and these guys certainly had success.”