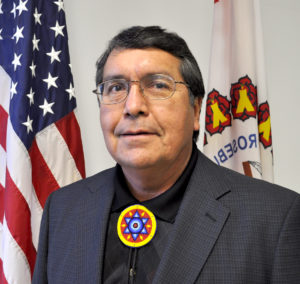 President Bordeaux serves as Itancan, chairman of council and is the chief executive of the tribe. In his opening address, President Bordeaux stated that he will work closely with newly re-elected Vice President Herman and each of the council representatives. President Bordeaux said, “We have been charged with a great opportunity to work for our people and the dedication that it takes to do that will be challenging at times, but we can do this together”.

President Bordeaux also expressed his commitment to serving the Oyate. He pledged to increase communication between tribal government and the people, by using all available outlets from social media to traditional newsprint to keep the public informed. The President also plans to visit students at Saint Francis Indian School, Todd County and other schools, where he hopes to inspire a new generation of leaders.

Tina Spotted Calf-Martinez, who has been appointed as the executive assistant to the president, and had previously served as the Department chairwoman for the Lakota Studies Department at the Sinte Gleska University, said on her first day in the office that, “This office is designed to make a difference for our oyate by expecting accountability and being a great role model, along with a healthy approach” .