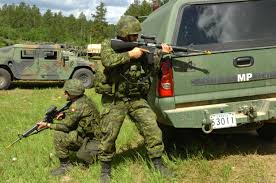 Created in 1984 with the cooperation of the National Forest Service and Custer State Park, this year’s exercise will allow about 2,100 service members to conduct combat-support and service-support missions in a realistic training environment and provide valuable services to the public.

There will be about 30 military units from 10 states and two foreign nations (Denmark and Canada) participating in the exercise from multiple branches of military service – Army, Navy and Air Force – working together to create an invaluable training experience. Participating units conduct military operations, train on their equipment and employ tactics, and complete various humanitarian missions and engineer projects that help improve the forest and infrastructure of many communities.

Local residents receive numerous benefits from the many engineer projects conducted during the exercise. Units transport timber to Native American communities that use it as firewood, conduct building construction, repair and upgrades, identify hazardous wilderness areas and make them safe for public use, and resurface local roadways that have fallen into disrepair.

Units participate in many training tasks and battle drills such as combat patrols, urban combat operations, land navigation, first aid, casualty evacuation and convoy operations. This provides a valuable opportunity for units to train on skills needed for any future overseas deployment.

Residents should be aware of an increase in military traffic throughout the region and in the communities of Rapid City, Hill City and Custer and can expect an increase in noise levels due to military training. Aircraft will be operating throughout the area and will respond to real-world emergencies during the exercise and remain in an all-hours-ready status. The public is asked to remain at a safe distance from all moving military vehicles and aircraft to prevent injury to personnel or damage to property.