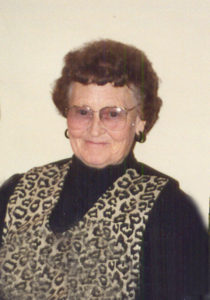 Mass of Christian Burial will be held on Thursday, April 5, 2018 at 11 a.m. at the Immaculate Conception Church in Winner, SD. Burial will follow in the Winner City Cemetery. Visitation will be held one hour prior to funeral service.

Mary completed her first 8 grades of school at the Churchside School near Clearfield, SD. She then attended Colome High School for 2 years and completed her high school education graduating in 1944 from Winner.

She attended college at Southern State Teachers College in Springfield, SD and began her teaching career at the Riverside School south of Clearfield. She attended several summer schools until she received her degree in teaching. She taught school for 26 years in 6 different rural schools.

In the fall of 1970, Mary took a leave of absence from teaching to care for her aging parents and never returned to full-time teaching. She did substitute teaching in almost all the rural schools in Tripp County in the 1970’s and also in the Winner Public Schools.

On Oct. 9, 1976 she was united in marriage to Gordon Johnson of Winner in the Immaculate Conception Catholic Church in Winner, SD. Mary said “marrying Gordon was the best thing I ever did in my life”.

They resided on the farm as she loved the farm and always had a beautiful flower garden and yard. After the death of Gordon in 2005, she resided in Winner.

Mary was a member of the Immaculate Conception Catholic Church, Catholic Daughters, Retired Teachers Association, American Legion Auxiliary and the VFW Auxiliary where she held the office of president and also District #8 president. She received the honor of being named the outstanding president in South Dakota.

Mary was preceded in death by her husband and her parents and a cousin Jack Elder.. Grateful for having been part of her life are her step-son Joel and wife Claudia of Security, Colorado, sister- in-law Betty of Omaha, NE, and 2 step grandchildren, 3 step great grandchildren of Colorado, nieces; Vicki (Don) Covey, Judy (Larry) Wagner, nephew, Murray (Circe) Brown, cousins; Jean Adel, Avis (Clarence) Von Eschen, and many friends.
We rejoice that her struggles are over and trust she is with her Lord and is reunited with loved ones. May ye Rest In Peace, dear Mary!