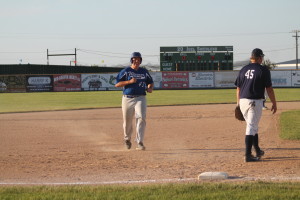 The Winner/Colome Legion baseball team played in a tournament in Aberdeen Friday through Sunday.
The Royals won three of the four games.

In the first game on Friday, Winner/Colome was defeated by Aberdeen 8-0 in five innings.  Carter Brickman pitched 4 innings giving up 8 runs (2 earned) on 7 hits and 1 strikeout.  Riley Calhoon and Jordan Turgeon each had singles.

In the second game, Winner/Colome defeated Mobridge 7-2.  Ty Bolton earned the win on the mound pitching 4 innings giving up 1 run with 5 walks and 4 strikeouts.  Drew DeMers earned the save in relief pitching 3 innings, giving up 1 run on 2 hits with 2 walks and 3 strikeouts.  Riley Calhoon had a triple and two runs scores. Reed Harter had a double and Drew DeMers had a single and two runs scored.

In the third game, Winner/Colome defeated Jamestown, N.D., 7-3.  Kelly O’Bryan earned the win pitching 7 innings and giving up 3 runs on 5 hits, 5 walks and 7 strikeouts.  O’Bryan had a double, single and 3 runs scores. Reed Harter had a single and 2 runs scored.

In game 4, the Royals defeated Milbank 3-2.  Harter earned the win pitching 7 innings and giving up 2 runs on 5 hits, 5 walks and 2 strikeouts.  Harter had a double and a single and Cameron Biggins had a 2 singles.

“We kind of laid an egg in game one against a very good Aberdeen team with a few very uncharacteristic errors but I was pleased with the way we rebounded to win three straight against some stiff competition,” said coach Drew Weber.

He said Jamestown is one of the leading teams in their class in North Dakota and Milbank is one of the front runners to win this year’s Legion title so earning victories over them was very special.