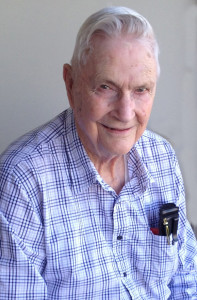 Funeral services were held at 10 a.m. Monday, Nov. 21, 2016 at the United Methodist Church in Winner. Burial followed at the Winner City Cemetery. Ivor Lee Eddie, of Winner, SD, passed away on November 17, at the Winner Regional Healthcare Center after suffering from complications of a stroke a few days prior. He was 93 years, 1 month, 2 weeks, and 6 days old.

Ivor Lee Eddie, known to all as Lee, was the son of George and Gretchen (Rethwisch) Eddie. He was born on Sept. 29, 1923 in Winner. Lee grew up in the Winner community and attended the South Sunnyside School. He graduated from Winner High School in 1941 and then engaged in farming on the family farm. On Sept. 24, 1947, he united in marriage with Irene Carol Fast and they raised five children: Linda, Dennis, Randy, Ron and Darla.

As a youth, Lee participated in 4-H showing cattle and horses. The Eddie family was community oriented with the local baseball league (including Lloyd and George Blomstroom, Ernie and Emil Konvalin) which were followed with barn dances mainly in John Hruska’s barn. After marriage to Irene, he started taking over the family farm in 1947.

Lee took pleasure in taking his family to Basin League baseball games at the Leahy Bowl and Family reunions in O’Neil, NE. His life centered on his family and the farm. It was not uncommon to host large family suppers on the farm during holidays. When traveling on family trips he never took the same road twice and was quick to notice details to say that he had an “Eagle Eye”.

Later in life, he enjoyed challenging Jumbles and Crosswords and commonly helped his sister Blanche when she was stumped. Saturday nights were spent at the VFW for supper followed with a game of cards with Ryal and Peg Vanneman along with Bob and Fern Ringstmeyer. An avid bowler he enjoyed his Bowling league Wayne Heller, Bud Mayes, and Dale Johnson. Enjoyed taking several Co-op trips across the country including Hawaii. Family vacations were taken with Wayne and Lois Heller as they played cards while their daughters played. In retirement, they enjoyed traveling to casinos with friends. His final years at Golden Prairie, he made lasting friendships at the meal table with his sister, Berniece Hanson, Florence Fisher, Rosie Glynn and Jim Jares. They were known as the fun table at the manor and dad’s humor and finger pointing will be missed by his table mates and staff.

Lee’s thirst of knowledge and learning paired with a curiosity for life was something instilled in all his grandkids. When it came to Lee’s grandkids he enjoyed challenging them to be the best they could be. You could always find Lee watching a western show and loved reading western novels.