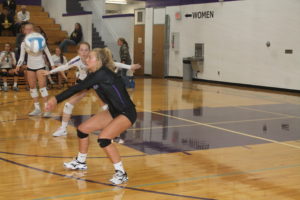 Morgan Hammerbeck and Gracie Littau were 100 percent in serving.

Ellie Brozik had a 2.50 serve receive rating and Hammerbeck 2.17.

LaCompte had 13 digs and Hammerbeck, 11.

“The first set we made too many serving and attacking errors,” said coach Jaime Keiser. “Then we settled down and we played aggressive and did a great job of attacking the ball and finding the holes. We kept Todd County out of system and chasing the ball all over the place. We also did a great job of serving aggressively. We played together as a team and were having fun,” said Keiser.

The next action for Winner will be Oct. 4 at White River and Oct. 6 at Chester Area. On Oct. 9, Winner will travel to Chamberlain.