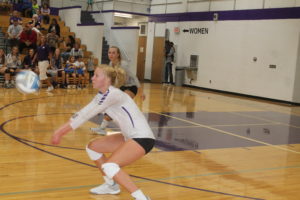 Mackenzie Levi and Gracie Littau were 100 percent in serving.

Littau, Levi and Morgan Hammerbeck each had one ace serve.

Hammerbeck had 11 kills and Abby Marts, 7.

Littau and Levi were 100 percent in serving. Brozik had 2 ace serves and 9 kills.

Hammerbeck and Root each had 8 digs.

Littau was 100 percent serving and Hammebeck was 90 percent.

Hammerbeck had 3 ace serves and Levi, 1.

“We came out focused and ready to play,” said coach Jaime Keiser. “We played pretty consistent most of the day. I was proud of how the girls showed intensity and how we jelled together as a team. All day we did a great job of attacking the ball which kept our opponent on the defensive end,” said the coach.

Keiser added: “In the championship match we came out ready to play and had the momentum most of the match. We did a great job of serving and attacking Dakota Valley and got them out of system. Dakota Valley is a good team and had some good hitters. It was a fun day with a great team effort,”