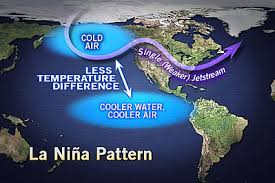 A La Nina climate pattern is more likely than not, according to a recent forecast from the National Oceanic Atmospheric Administration’s (NOAA) Climate Prediction Center.

Historically, La Nina climate patterns have often meant colder than average winter temperatures in the Dakotas. However, Edwards explained, this is not consistent, as La Nina events, since 1985, have not been as cold as those between 1950 and 1985.

“For the Northern Plains region there is no correlation between La Nina and winter season precipitation, and as a result it is challenging to forecast winter snowfall,” she said.

Both of these historical patterns are reflected in the NOAA climate outlook released October 19, 2017.

For the months of December through February, much of the northern tier states are more likely to be colder than average, including northern South Dakota.

As far as precipitation, Edwards said there is a slightly increased chance of wetter than average conditions in western South Dakota.

“The fall season is often a season of transition,” Edwards said. “This year is no exception as there have been both warm and cool periods with the western region remaining largely drier than average this season and the eastern region has had above average rainfall.”

Drier weather has combines rolling
Soybean harvest is nearing completion in South Dakota’s northern tier counties, which have been drier overall in recent weeks. Harvest is now underway in southern counties as drier weather has arrived and soil moisture has reduced.

Drought conditions continue to hold steady in the west. Some vegetation in drought-stricken areas did begin to green up after receiving rainfall in September.

“This does not help grazing this year but indicates that there is some hope for pasture recovery next spring if climate conditions are favorable after this year’s drought,” Edwards said.