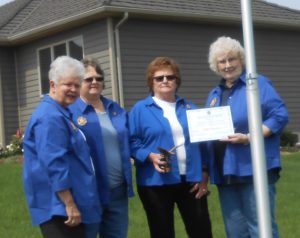 Sally Kingsbury recently attended the state VFW Auxiliary convention in Sioux Falls. She was accompanied by her husband, Gary and daughter, Dawn Boerner.

During the convention, Kingsbury was honored by a color guard escort to the president’s station where it was announced she was the state hospital volunteer of the year.

State president Carrie Alm presented Kingsbury with an eagle statue which was engraved with her name and the award.

Leanne Payne, state hospital chairman, told the audience of the many accomplishments Kingsbury made by helping the veteran and the number of hours she has invested in serving veterans who reside in local facilities.

National representative Jean Hamil, serving as national conductress, spoke about the importance of letting the veteran know they are not forgotten. She praised Kingsbury for her devotion to the veteran. Hamil presented Kingsbury with a citation from the national president.