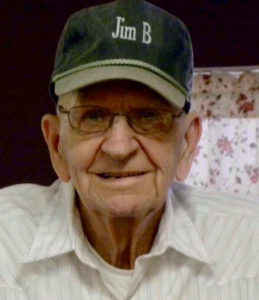 Jim was born at rural Wood, SD on June 12, 1929 to Ivy and Maysie (Dickerson) Burnham. He attended the Lookout country school through the eighth grade. Following school Jim worked as a farmhand for his sisters and other various farmers in the area. On April 10, 1948 Jim married Mildred Ann Bachmann at McMinnville, OR. After a short stay in Oregon they made their home in the Wood area. Jim continued working as a farmhand until 1970, when he started driving a bulk fuel delivery truck. He and Mildred raised cattle, milk cows, pigs, chickens and five kids. Jim enjoyed staying busy woodworking, welding and gardening. He also liked to fish, was an avid rattlesnake hunter and never missed an area rodeo. Jim retired from driving fuel truck in 1999 but continued to help area farmers with anything they needed. Jim was known to be a prankster and always looked forward to teasing the children of his route customers.

Jim was the last remaining survivor of nine siblings and his parents. He is reunited in the Heavenly Kingdom with his beloved wife Mildred who died on June 8, 1984.

An online guestbook may be signed at www.kirkfuneralhome.com