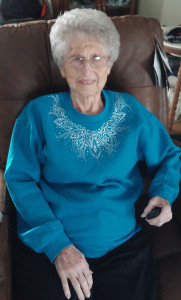 Hazel was born on January 19, 1930 to Frank and Jessie (Johnson) Hrabanek. She was born in Winner, SD at the home of her Aunt and Uncle, Esther and Reinhold Woidneck. Her father purchased a new 1930 Ford Model “A” to take her home. They lived in Tripp County, Colome, SD.

On April 15, 1951 she was united in marriage to Fredrick (Fritz) Kaiser. To this union 4 children were born: Glenda, Kathy, Darrel, and Larry. They lived in Winner for two years and then moved to the farm they purchased in 1955. In 1966 they purchased Frontier Motors in Winner, SD. Hazel worked there as a bookkeeper until 2007 when she retired.

Hazel loved to sew, making clothing for all of her family, sewing many quilts. She also did daily crosswords, reading, crocheting, baking, and canning. Vegetable and flower gardening was another passion of Hazel’s.