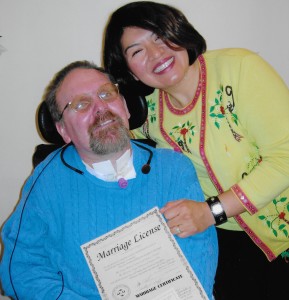 Gregg Michael Schwartz, age 60 of Denver, Colo., formerly of Colome, passed away suddenly on April 24, 2016 at his home in Denver, CO. Gregg was born to the late Richard Lee Schwartz and the late Ruth Marlene Harter Schwartz.

Gregg’s childhood was a busy one spent with his dog Brownie. Greg and lifelong friend, Dave Cahoy went hunting and fishing every chance they would get. He had an old pickup that was referred to as Mergatroid and he put a lot of miles on it as a teenager. He played ball on the Colome baseball team. He attended eight years of grade school in a country school northeast of their farm. Gregg graduated from Colome High School in 1974. After high school he went to Gillette, WY and pursued work for a short time and then enlisted in the United States Navy. While stationed at Moffet Field in California, Gregg was involved in an auto accident that left him a paraplegic for life. He spent time in the Minneapolis VA Center prior to his mother taking care of him on the family farm. He moved to Sioux Falls, SD where he worked as a volunteer at the Sioux Falls VA Hospital. Gregg moved to Denver, CO March 30, 2001 where he met Marilina on August 22, 2001. They were married October 13, 2005 and purchased a home in Denver where they resided for the last five years. Gregg enjoyed the backyard filled with beautiful flowers tended by Marilina. During those five years Gregg was in the hospital only two days.