Galbraith Named Player of the Week 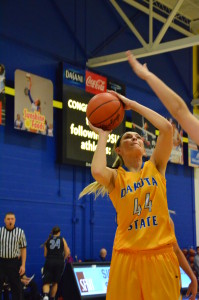 Galbraith, 6-foot-1 center, posted a pair of double-doubles as the Lady T’s went 1-1 record for the week. She tallied 14 points and pulled down 11 rebounds with four blocked shots after falling short to long-time rival Dakota Wesleyan (S.D.) 65-60 on Nov. 10

.
Galbraith followed up with 17 points and grabbed 13 rebounds in 79-61 road victory at Mount Marty (S.D.) on Nov. 14, ending DSU’s 14-game losing streak in the series meeting with the Lancers.

For the week, Galbraith averaged 15.5 points and 12.0 rebounds per game for Dakota State. She was 14-of-26 shooting from the field (53.8 percent and converted 3-of-4 free-throws. She also had five blocked shots for the week.

Sharee is the daughter of Todd and Carol Galbraith of Winner. She is a senior Elementary Education/Special Education major at Dakota State University.
Dakota State currently holds an overall record of 5-2, their best start since 2007-08 season when the Lady T’s started their first seven games with a 5-2 record.