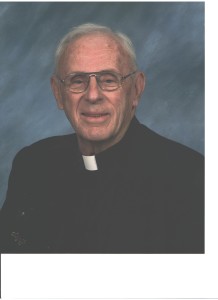 He was born March 26, 1926, in Erwin, SD to Joseph and Hannah (Munger) Martin. His father was an Irish orphan who came out west on an orphan train, and Fr. Lyle spent many years searching for his ancestors. After graduation in 1944, he enlisted in the US Army, and his very first combat experience was in the Battle of the Bulge. He received the Bronze Star and many other awards for his bravery there. He never forgot General Patton’s command to be the best soldier and return home to be the best citizen he could be. Fr. Lyle was a proud American and a true patriot.

After discharge, he returned home and married Jean Larson. They had four children, and he worked for Northwestern Bell telephone company as a lineman, salesman, and manager for 18 years. In 1964, he became a salesman for Equitable Life in Gregory, achieving million-dollar roundtable his first year. Later he became a broker/owner of Martin Real Estate in Sturgis and Belle Fourche.

Lyle’s faith was always strong, and after the death of his son, Bob, in 1983, Lyle made the choice to become a deacon in the Episcopal Church, and from there he began his ascent towards priesthood. At age 63, he entered the seminary, and upon his ordainment, he served the parishes of Mobridge and Gettysburg. Later, he served in Winner, Watertown, Sidney and Blair, NE, and ended his career in Gregory, at the age of 85.

As a priest, Fr. Lyle did many great works. He strongly believed that his mission was to serve his fellow man. In many of the towns where he served, he started thrift stores and food banks to assist the less fortunate in his community. For this work, he was recognized as Citizen of the Year in Sidney, Blair, and Winner, and in 2016, Governor Daugaard proclaimed March 26 Father Lyle Martin Day. Lyle was the “idea” man. Like many people, he had great ideas, but the difference is, he always followed through, never stopping until he accomplished what he had set out to do. Lyle will be most remembered for is his charismatic sense of humor. He was a proud Irishman and a great story teller; one could never predict what he would say next, but he always got the punch line right.

In 2006, Lyle married Moyra Pospisil of Winner, and they moved to Gregory. They had ten happy years together until her passing in 2016. As a priest Lyle officiated the weddings, baptisms, and funerals of many people throughout South Dakota, but he was especially proud to officiate the weddings of his grandchildren and baptisms of his great-grandchildren.