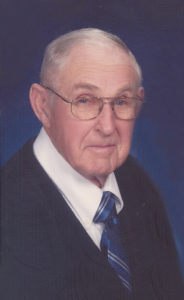 Doyle was born on Nov. 4, 1933 to Truman and Louise (Metzger) Mathis in Mitchell, SD. In 1936 the family moved to Yankton, SD. Ten years later the family moved to Meckling, SD where they resided on the farm. Doyle graduated from Meckling High School in 1951.

After graduation Doyle enlisted in the US Army where he was stationed in Anchorage, Alaska for two years.

Doyle and his brother Richard (Dick) purchased the International Harvester Implement dealership in 1958. They have been in business for 60 years as of March 2018. Throughout those 60 years it was not only a business but a place where he gained a lifetime of friendships.

Doyle was united in marriage to Eldora (Williamson) on Oct. 18, 1959 in Winner, SD. They were blessed with four children, Ann, Lynn, James & Tom.

Doyle and Eldora spent 20 years on Monday nights square dancing and every Saturday night at the Carlock Dance Hall. The past 26 years he enjoyed his yearly snowmobile trips to the Black Hills with the boys.

Along with selling farm machinery, his love for his family, farming, and raising livestock continued throughout his life.

Doyle is preceded in death by his parents Truman and Louise Mathis.