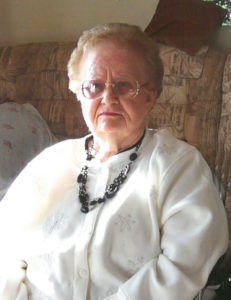 Dorothy Edwards, 92, of Winner, SD passed away on Monday, May 14, 2018 at the Winner Regional Long Term Care Facility in Winner.

Mass of Christian Burial was held on Thursday, May 17, 2018 at 10:30 a.m. at the Immaculate Conception Catholic Church in Winner. Burial followed in the Winner City Cemetery.

Dorothy Marie (Komer) Edwards was born on Nov. 28, 1925, in St. Peter, Minn., to Fred and Margaret (Sharkey) Krueger. On Sept. 3rd 1928 she became the adopted daughter of Leonard and Johanna Komer at the age of 22 months. Sadly, Johanna passed away in September of 1931.

Dorothy grew up in the Star Valley/Ideal area being raised by her father Len. Dorothy graduated from the Ideal High School in 1944, the last class to graduate.

Dorothy married Alton Edwards on Jan. 16, 1946 and to this union 4 children were born; Betty, Dale, Joyce and Norma Jean. In February 1953 they moved to Custer and returned to the farm in February 1963. On January 16, 1971 Dorothy and Alton celebrated their 25th Wedding Anniversary at their home. On Feb. 25, 1971, Alton passed away. Dorothy then moved into Winner where she resided until moving to the Long Term Care Center in Winner. She was a housewife and a homemaker. Her family was of utmost importance and she was known for always putting the wants and needs of others before her own.

Dorothy and family always believed and celebrated her birthday on Nov. 23rd, until doing genealogy and discovered that it was in fact the 28th of November. It was too late to change so Dorothy and family continued to celebrate on the 23rd.
Dorothy worked every Friday afternoon preparing for Friday steak night at the American Legion for thirty years and was named Outstanding Worker in 1982. Dorothy was a lifelong member of the Immaculate Conception Catholic Church in Winner, the VFW Auxiliary and the Legion Auxiliary.

Dorothy is survived by her son Dale, (Freida) Edwards of Ardmore AL, daughters; Joyce (LeRoy) Jelinek of Winner and Norma Jean Stoner of Hartford, SD and 8 grandchildren, 13 great-grandchildren and 1 great-great grandchild. Through genealogy research Dorothy was notified that she had family living in Illinois that she never knew about, a first cousin, Stan and his two children.

Dorothy was preceded in death by her husband Alton, daughter Betty, 2 sons-in-law; Noel and Douglas Stoner Sr. and an infant granddaughter.