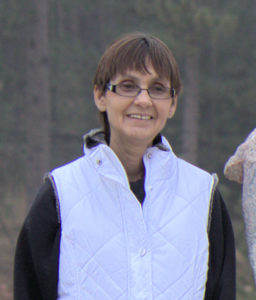 Donna peacefully passed away on April 7, 2018 at the age of 61 at the Dougherty House in Sioux Falls SD.

Donna Marie Bromwich Bowar was born Sept. 4th 1956 in Winner SD to Beverly (Dvorak) and Percy “Dean” Bromwich. She grew up in the Colome and Winner areas and she graduated from Winner High School in 1975.

She moved to Kennebec in 1978 and worked at the Elevator, Extension Office and Kennebec Telephone Company. But her favorite job was babysitting kids who became an important part of her life.

Donna had many hobbies some of which included fishing, embroidering, quilting, watching Nascar racing (favorite driver Jimmie Johnson) and watching basketball (especially the Boston Celtics). Most of all she enjoyed spending time with her kids, grandkids and the kids she babysat. Donna followed them in their school and sporting events and was there to cheer them on.

Donna was united in marriage to Rod Bowar and they enjoyed 30 plus years. During this time they traveled and went on many camping trips and later purchased a cabin. She spent a lot of time watching the wildlife eating and wandering around the cabin. They spent many hours exploring the ATV and snowmobile trails.

Donna was blessed with 4 wonderful children and in addition to her husband Rod she is survived by Troy Christensen of San Francisco CA, Chaz (Amy) Bowar of Kennebec and Tiarra (Heath) Bowar Choal of Kennebec. Along with 4 grandchildren Jordon, Jesse, Kaden and Ryker. She also had 3 very special children that she considered grandchildren—Carter, Colton and Chloe Collins. She is also survived by her father Percy “Dean” Bromwich and his wife Connie, her mother’s husband Darwin Unzelman, sisters LeeAnn (Brian) Stuart, Lori (Daniel) Schmidt, Monica (Mark) Seachris, brother Jim (Deb) Bromwich, half-sister Amber (Valentin) Plancarte, mother and father in law Charlie and Gloria Bowar, sister in law Dana (Arlen)Mehrer and many nieces and nephews.

She was preceded in death by her son Laddy Christensen, a granddaughter Tyra, a brother Robin Bromwich, her mother Beverly Unzelman and maternal and paternal grandparents.

Because Donna wanted all kids to have an education and make the most of themselves all memorials will go to the Lyman School Building project.