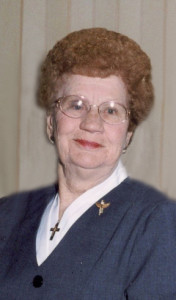 Darnytia Kucera died peacefully on May 29, 2017 at the Winner Regional Hospital in Winner, SD after a courageous battle with cancer. She was 85 years old.

Darnytia Ioma Boes Kucera was born on July 20, 1931 on the family farm in Spring Valley Township, Gregory, SD to Jacob and Hulda Boes. She was one of 8 children. She attended Allum Country School south of Burke, SD.

Darnytia married Joseph William Kucera on December 4, 1949. They lived on a farm south of Gregory until 1970 when they moved to Gregory. The couple had five children: Linda, Robert, Richard, Darla, and Brenda. She worked a variety of jobs and excelled at whatever she did. She impacted the lives of the children she cared for in her in-home daycare. Darnytia was an avid bowler, loved to garden, and did a variety of canning. She loved to dance at Carlock and listen to Polka music. Mollie B Polka Party was a favorite. She moved to Winner in 1978.

On June 6, 1981 Darnytia married Robert Heying. They enjoyed traveling and took many trips. She enjoyed her job at Burns Pharmacy where she managed the soda fountain and served several generations of Winner youth. Making salads at the American Legion filled many Friday afternoons. Telling her jokes and stories with a group of friends over a cup of coffee was a favorite pastime. Friends will fondly remember Darnytia’s “love taps” and have the bruises to show for it.
She married James Kucera on March 24, 2001. She and Jim enjoyed camping and fishing and traveling to many vacation spots. They enjoyed their Sunday afternoon drives to different casinos and taking the bus for overnight trips. As Jim says, “Mom was never a loser.”