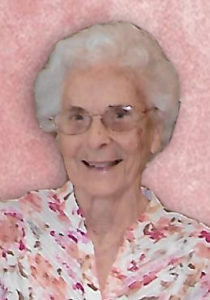 Darline Miller, 92, of Faulkton and formerly of Kennebec, went to be with the Lord on Easter Sunday, April 1, 2018 at the Faulkton Senior Living.

Funeral services were held 10:30 a.m., Thursday, April 5, 2018 at Zion Lutheran Church, Presho, with Pastor David Otten presiding. Burial followed in the Kennebec Cemetery.
Darline Imogene Eisenbraun was born at Winner, SD to Albert and Tabea (Fettinger) Eisenbraun on July 13, 1925. She lived with her parents and family on a farm in Tripp County, where she attended grade school. She graduated from Witten High School. Darline was baptized and confirmed in the Lutheran faith.

On Aug. 30, 1943 she married David Miller. To this union three children were born: David, Allen, and Linda. They farmed north of Witten until 1965, when they purchased a ranch north of Kennebec. They lived there until David died in 2003. Darline then moved into Kennebec where she made her home until 2010 at which time she entered the Faulkton Healthcare Center, where she remained until the time of her death.

Darline was a hard worker. As the wife of a rancher, she worked in the fields – mowing and stacking hay, repairing broken sickles like any farmer could, caring for the livestock, and helping brand and vaccinate cattle. Sometimes she ended up getting the raw end of the deal with broken bones. Darline was a good cook and her house was always spotless. Company was welcome anytime. She had a green thumb for flowers and gardening, and her house was full of beautiful plants including her cherished Christmas cactus. Another natural ability that she inherited from her father were her carpentry skills. She could make anything out of nothing and make it look nice. Darline was an excellent seamstress and not only made clothes for her family, but she also made the beautiful square dance shirts for herself and David for when they went square dancing.

Darline’s grandchildren were her pride and joy. She loved every one of them and she did her job as Grandmother very well by spoiling them with love and hugs. Christmas was an important time at the Miller household!

Sharing in her life are her sons, David D. Miller of Presho and Allen (Candy) Miller of Beula, MT; daughter, Linda Gifford (Wayne Vincent) of Faulkton; seven grandchildren; numerous great-grandchildren; many nieces and nephews; and a special friend, Renee Miller.

Darline was preceded in death by her husband, David; her parents; two sisters, Lydia Strom and Helen “Toots” Koepp; and one brother, Robert Eisenbraun.

She will be greatly missed by those who knew her. May she rest in peace with our Lord and Savior.

Luce Funeral Home of Faulkton has been entrusted with Darline’s arrangements. (www.familyfuneralhome.net)