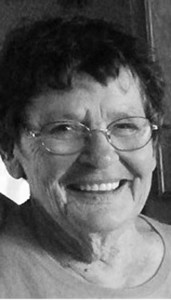 Darlene May Foss (Schmidt), 73, formerly of Winner, SD, passed away peacefully surrounded by her family on July 25th, 2016 at home in Pierre, SD after a courageous battle with cancer.

Darlene, daughter of Cornelius and Pauline (Woehl) Schmidt was born July 26th, 1942. During her youth she grew up and attended school in Winner. Darlene enjoyed talking about the adventures and mischief she experienced during her youth with her eight brothers and sisters.

On January 14th, 1958 Darlene was united in marriage to Darrell Foss. Through this marriage three sons were born, Micheal, Kelly and Todd. Darlene and Darrell lived and worked on the family farm near Winner, which they later owned and operated until their retirement in 2012. In 2014 they left the farm and moved to Winner. Darlene later moved to Pierre in 2016.

Darlene loved the special bond she had with her twin sister Doreen Bolander. They spent many joyous times together and were almost inseperable.