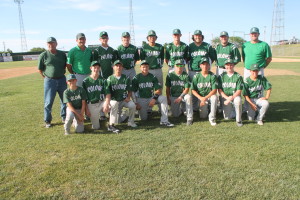 The team opened with a 9-4 victory over Gregory at noon on Saturday. Jackson Kinzer was the winning pitcher.  Leading hitters were Chase Dufek with thee hits including two doubles and a single. Kinzer added 2 singles.
In the second game, Colome defeated Valentine, Neb., 10-4.   Calvin Ringing Shield was the winning pitcher with Jacob Beckers credited with the save.   Dufek had a double, Thieman a triple and a double and Ringing Shield a triple.