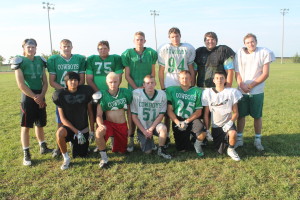 Colome High School football team has a new head coach who is working hard to prepare the team for the season opener which is just two days away on Aug. 18.

The Cowboys, the defending Class 9B state champions, will open on the road Friday at Centerville. The game will be at 7 p.m.
Ben Connot is at the helm of the Colome Football team this year. He is a 2013 graduate of Winner High School where he was a standout on the Warrior football team. He is two time all state defensive back.

Connot played football at South Dakota School of Mines and then transferred to Black Hills State University where he is currently a senior majoring in special education.

Connot will be a paraprofessional in the Colome district this year and will do his student teaching in Colome the second semester.
“I knew Colome’s coach had resigned and they also had an opening is special education,” said Connot. He called Supt. Ryan Orrock and told him he was interested in both the football coaching job and the special education position.

Connot said everything fell in line and he was approved by the Colome School Board.  “I am excited, I am looking forward to the season,” he said.

In practice, the Cowboys have been working on a new offense and new defense. “We play a week earlier this year and there is not a lot of time to prepare so there is a sense of urgency to make every rep count,” said Connot.

The Cowboys have some of their key positions back from last year.

Layton Thieman will be the quarterback and last year was named the Joe Robbie MVP in the state championship game.  Kinzer, who played a big role for the Cowboys last year, will return as a running back and defensive back.  On line will be Kolton Salonen, Beau Bertram and Nash Atteberry.

Calvin Ringing Shield has been working as the kicker and Salonen will be the punter.

The Cowboys offense will be able to run the ball and also pass. Connot says they want to establish the run first.

The defense will be strong with experience in the secondary coming from Thieman and Kinzer.  Chase Dufek played some last year but thecoach says he will be asked to play a bigger role this year.

Gene Bertram is the assistant coach and defensive coordinator. Other assistant coaches are: Charles Hosford, Kory Foss, Colton Seegers and Terrance Kinzer who will be helping with the defensive backs and special teams.

Expectations are high for the Cowboys. “We have a good opportunity in front of us,” he said. “We have experienced players in key positions. What I expect is for everyone to embrace that opportunity. We cannot get complacent. We need to realize what kind of opportunity we have and take a hold of that and stay focused and execute.”

Connot added: “I can’t wait for the opening game of the season.”