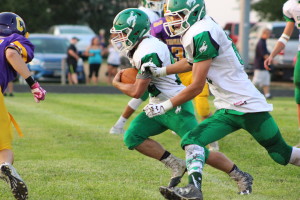 The No. 2 Colome Cowboys started their season with a 50-0 victory over Centerville Friday night.

The game ended in the third quarter due to the mercy rule.

Colome, the defending Class 9B state champion, had a total of 371 yards of total offense.

“We started out slow but after we got going we made some big stops,” said first year coach Ben Connot. “We really got rolling on big plays.”

Connot said he was excited to get the season started and glad to get the first win under his belt.

Connot said a lot of younger players were able to get into the game and they played hard and moved the ball.

The Cowboys will host Tripp-Delmont-Armour/Andes Central/Dakota Christian Friday night in Colome with the game starting at 7 p.m.