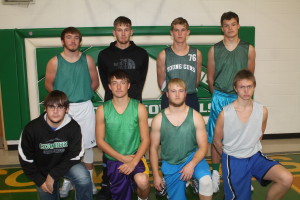 The Colome High School boys basketball team will open the season on Dec. 13 when they host Marty.

The Cowboys have eight returning lettermen—Isaac Kortan, Kelly O’Bryan, Will Cahoy, Andrew Laprath, Jackson Kinzer, Holden Thieman, Layton Thieman and Beau Bertram.  The only loss from last year is Reed Harter.  Added to the team this year is Kolton Salonen who played last season for Gregory.

There are 21 athletes on the team this year. The seniors are: Holden Thieman, Kortan, Garrett Salonen, O’Bryan, Cahoy and Tristan Munroe.  The juniors are : Laprath, Jeremiah Yeaman, Salonen. The sophomores are Beau Bertram, Kinzer, Wyatt Cahoy and Calvin Ringing Shield.  Jacob Beckers is the only freshman.  There are five 8th graders on the team: Rhett Bertram, Allen McKenzie, Nathaniel Hanson, Mike Supik and Linkyn Petersek.

Last year the Cowboys were 16-7 and won the district for the first time since 1978. The Cowboys lost to Corsica-Stickney in the region championship.  Coach Drew Weber says the Cowboys have a deeper and more experienced team this year.

Two seniors are injured and will return to the team later in the season. Weber says when Kortan and Holden Thieman return they will provide more depth to the team.  According to Weber, one thing the team needs to improve on is shooting. “We have to have someone step up and knock down some outside shots,” he said. Last year that outside shooter was Harter.  “Offensively our goal is to move the ball, be quick with a lot of movement,” said Weber.  On defense, Colome will play man to man.  What the team has this year and lacked in others is more height and length.

The Cowboys will play in several classics this year in addition to the Jones County Tournament. Colome will be in the Snowball Classic in Winner, the Highmore Classic and the DSU Classic in Madison.  Derek Graesser is the assistant coach.