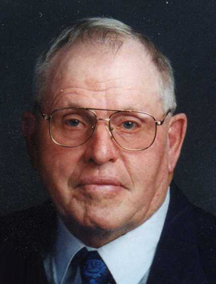 Clifford Klein of Hidden Timber passed away April 12, 2016, at Pine View Good Samaritan Center in Valentine, NE. He was 93. Celebration of Life will be held at Trinity Episcopal Church, Winner, SD, on May 21 at 10:30 a.m.

Clifford Klein was born at home near Valentine on June 14, 1922, to Coral (Hobson) and George Klein. The family moved to Todd County, SD, shortly thereafter and lived on rented farms before finally settling on Rock Creek, south of Hidden Timber.

Clifford attended country school and graduated from Mission High School in 1938. Following graduation, he began farming and ranching with his father and brother Lawrence. In early 1945, Clifford volunteered for military service in place of his drafted brother and chose the Marine Corps. His military service included a tour of occupied China where he earned the rank of sergeant as a telephone man. Following his military service, he returned to the family farm. In the fall of 1949, he re-connected with JoAnn Kositzky of Winner, SD, the sister of his good friend Paul, at a dance on Dog Ear Lake. They were married Sept. 30, 1950, in Winner, and moved into the home he built for them on the farm.

JoAnn and Clifford raised three sons: Robert, Jim, and Milton. They were particularly proud when all of their sons and grandchildren received their college degrees.

Clifford became a supervisor of the Todd County Conservation District, a position he held for over 30 years. During that time, he served on the South Dakota Association of Conservation Districts’ board of directors, as vice president, and as president. He was also a member of Trinity Episcopal Church, was a 32nd degree Mason at the Mission Masonic Lodge, and American Legion Post 90.

Clifford was happy to help his family with their building and electrical wiring projects. He helped to build or remodel homes for his sisters, in-laws, and for his sons. Clifford loved his work on the ranch. He often told folks he’d rather drive a tractor or ride a horse than anything else. He took pride in being able to plant corn in straight rows and was proud of the improvements the Kleins made in their land and cattle.

Clifford and JoAnn traveled to Europe to visit Milton during his Army service. They also enjoyed travelling in the United States, sometimes on conservation business, sometimes to visit family.

Clifford never met a stranger and would strike up a conversation with anyone he met. In his seventies, a series of strokes affected his speech, a real blow to a person who loved to talk. During his later years, he was debilitated by worn-out joints and bones from decades of hard work and unforgiving farm equipment.

In 2006, Clifford and JoAnn moved to Cherry Hills Assisted Living in Valentine. JoAnn passed away in December of 2007, and Clifford later moved to Pine View Good Samaritan where he passed away April 12, 2016.