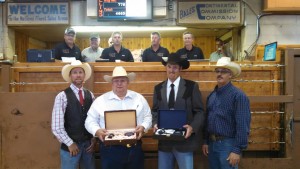 The Grand Champion was Dan Clark of Winner, South Dakota and the Reserve Champion was Bill Jensen of Langford, South Dakota. The first time auction contest had four prequalified auctioneers: Brett Heath of Colome and Curt Littau of Carter, along with Clark and Jensen.

Jim Anderson, Alan Bales, and Kent Bales are the weekly auctioneers and managers at Huron Continental Marketing and were master of ceremonies and judges along with 14 other livestock related judges.

Huron Continental Marketing plans to host the Dakota Cup every year on the first Tuesday after Labor Day. The contests were scored similar to the World Livestock Auction contest and scored on a scale of 1 to 10 based on Voice quality and clarity, bid catching ability, conduction of the sale and would you hire this auctioneer.