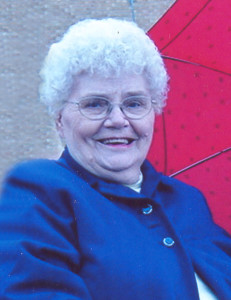 Carol Jean (Tharnish) Hazuka was born on May 3, 1928 in Creighton Nebraska, daughter of Henry and Leona Tharnish. She had two older sisters, Marcelline and Alma, both deceased.

Carol Jean is fondly remembered for her love of music (there was always singing in her house), hot meals on the table every night, being the nurse for one of her children that lead to nursing two, three and eventually 6 kids sick all at one time, and the fun of games and cards. She always made Easter and Christmas a special family time. She and Tony loved camping and gardening in their backyard. Catholic Daughters and the Catholic Church were very important in her life, many times she would join clubs and be voted in eventually as president. She had a great dry sense of humor. Most importantly, if ever you were in trouble or having a hard time, she was the one to go to. She always had a listening ear and nonjudgmental attitude.