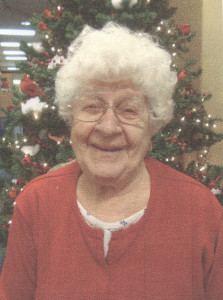 Bridget ‘Bea’ Angela Massingale was born Oct. 16, 1928 near Wood, South Dakota on the Thunder Creek to John and Mary (Dittman) Rohloff. She died Dec. 4, 1916 at the Community Memorial Hospital in Burke, South Dakota at the age of 88 years.

Bea was raised on a farm near Wood, the third of for children. She taught school for a year and later met Ross Massingale. They were married May 14, 1948 and to this union four children were born: Dian, John and the twins Bill and Betty. Bea and Ross ranched and had a spraying operation.

She enjoyed living on the ranch, gardening, fishing, traveling and her grandchildren. In her younger years you could catch her Hula Hooping with kids and filming the family. She enjoyed having friends and family over for coffee.

After her husband’s passing, Bea became friends with Duane Dvorak. The enjoyed time together in Wood where she also loved gardening, her pets and having coffee and treats for her frequent visitors. They loved taking the grandchildren fishing, hunting, boating and trips to the cabin in the Black Hills. They enjoyed yearly trips to Alaska sightseeing and fishing for salmon. Together they had many adventures until Duane’s passing in September of 1991.

After this Bea Willis (Kiki) Dickson and spent the rest of her time with him. The two enjoyed going out, going to the casino and visiting kids and grandchildren. Upon moving to Valentine, she lived in an apartment before moving to the Cherry Hills Assisted Living. She enjoyed her time there until moving to the TLC Assisted Living Burke, so she could be closer to her daughter. She lived there until her passing. Everyday Kiki would call and talk to her, making sure she knew he was always there.