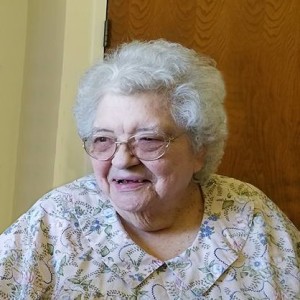 Berniece Burtz formerly of Winner, went home to be with her Lord on Saturday, Nov. 12, 2016,at the Elms Nursing Home in Macomb, IL where she has resided for the past 5 years. She was 90 years old. She was born Opal Berniece Ruf, daughter of John and Mae Ruf, on the family homestead in Greenwood Township, Tripp County on Aug. 26, 1926. She joined two older sisters, Ariel, born in 1914, and Doris, 1918. In 1932 the family moved to Millboro where John Ruf became pastor of the local church. Four years later in 1936 the Ruf family moved to Rockerville, and the next year to Lake City. In 1939 they settled in Dannebrog, NE where in 1944 Berniece graduated from Dannebrog High School. Following high school Berniece attended Omaha Bible Institute for 3 years graduating in 1948.

Berniece was married to Raymond Burtz of Winner, on June 20, 1948 in St. Paul, NE, and the couple made their home on the Burtz Brothers Ranch in northern Tripp County. The couple’s first son, Durwin Keith was born on March 19, 1951. He was joined by sister Koreen Kay on October 4, 1954, Wendell Ray on July 26, 1956, and Ronald Gene was born April 4, 1960. Through the years Berniece was active not only as a wife and mother, but as pianist for the Witten Baptist Church and the Presho Community Bible Church, as a Sunday school and Vacation Bible School teacher, piano teacher, club member, Women’s Bible Study leader, and church treasurer. She was active in the Gideons Auxiliary, and loved to read and teach the Bible, play the piano, garden, embroider, and sew. Beginning in 1976 Berneice worked alongside her husband Ray and their children to move and remodel a former one-room schoolhouse into a cabin the family enjoyed with friends and neighbors on their farm along the White River for many years. Raymond preceded her in death in August of 1999, and several years later she moved from the farm to Winner where she enjoyed playing with the local Kitchen Band, and continued as pianist for the Witten Baptist Church as long as she was able.