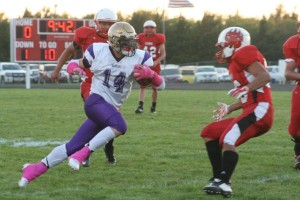 WINNER—Windsor Barry was playing for more than the Winner Warriors this season.

The senior running back and defensive back helped guide Winner to a perfect 12-0 season that was capped off with the Warriors sixth state football title. But winning the Class 11B state championship was a way for Barry, a senior, to show love for his mother.

In addition to making his family proud, Barry proved himself as a heck of a player for Winner. For his role in helping lead the unbeaten Warriors, which outscored their opponents 594-26, Barry has been named The Daily Republic’s 2015 football player of the year.

The award winner annually is determined by a point system that awards five points to the top player, four points to the second player on the ballot and so on. Barry received two first-place votes and one second-place vote to finish with 14 points.