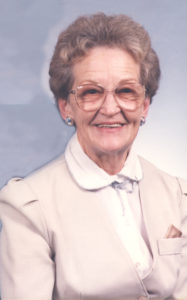 Babe Moeller, age 94, of St. Libory, Neb., passed away on Oct. 6, 2017 at the Marry Lanning Healthcare Center in Hastings, Neb. Funeral Service were at 10 a.m. Oct. 12, 2017 at the United Methodist Church in Winner. Burial followed at the Winner City Cemetery.

Babe (Sweetland) Moeller was born to Gertrude and Parley Sweetland on May 2nd, 1923 at their home in Neillsville, Wis.. She had three brothers and one sister-Parley, Bob, Dan, and Linda (Becik). She also had one brother and one sister who were lost at birth. The Sweetland family moved several times, from Wisconsin to Illinois and Wyoming. Eventually Babe alongside her two sons Patrick and Bill, and sister Linda moved to Winner, South Dakota. This was where she would meet the love of her life, Willie Moeller. They met on Main Street in Winner, and were married in 1956 in Pierre after only two short weeks. To this union also came her two sons, Patrick and Bill McHenry, which Willie saw as his own children.

After marrying, Willie and Babe purchased The Little Diner in 1960 on Main Street in Winner, owning it for three years before moving to Newport, Neb. They bought the Bar 20, which was along Highway 20, and owned and operated it for another three years. Willie had always wanted to move to a large city and work for a big company. A friend referred them to a big plant in Grand Island where they made bombs. Willie phoned the company that very next day, and both got jobs at the bomb plant. Babe worked making trinkets and mini mites, which was very fitting considering her small stature and powerful personality, while Willie was in charge of measuring the powder. They both worked together until the plant closed four years later.

After the closing of the plant, Willie and Babe wanted to settle down and move from the city. They purchased an 80 acre farm near St. Libory, Neb. where they still reside today. Their quaint farmhouse is nestled amongst many fields of corn and trees, alongside their barns and guest house cottage. They always had a big garden, and took great pride in riding their lawn mowers to make their yard look special. They always had many cats to welcome their guests. Babe was known for being an excellent cook, and loved to host friends and family.

Besides gardening and cooking, Babe spent her pass time reading. She would read as many as three books a week. She was a lifelong member of the VFW, thanks to her father who served in World War I, and was still very active in the post in Winner. She was passionate about politics, and was respected for giving her honest opinion.

Babe was always dressed in her very best. Willie said she would never be caught without clean clothes on, even when working with the pigs, in case someone she knew stopped by. Her hair was styled and nails painted, and she displayed a very great sense of style. However, her true beauty was on the inside. Babe was a caring wife, sister, mother, aunt, and friend. It was known to everyone that she also had a lot of spunk in her!

Babe made her journey to heaven on Friday October 6th, 2017 with her loving husband Willie of over 60 years by her side. The two made a lasting impression on the hospital staff where Babe was being cared for, and to everyone they met. Whether it was working in their restaurants or in their yard or garden, Willie and Babe were always together wherever they went.