A Deadlier Enemy than Poison Gas 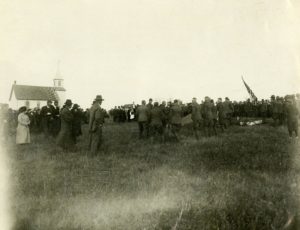 “Coughs and sneezes spread diseases as dangerous as poison gas shells.” This saying printed in newspapers of the time may have been as catchy as the disease it was warning against: the Spanish influenza.

The disease claimed more lives than bullets and shells during World War I, which was drawing to a close in the fall of 1918. An estimated 18 million people died in the Great War, according to the National Archives. The influenza epidemic killed an estimated 50 million to100 million people worldwide during a two-year period. One-fifth of the world’s population contracted the deadly virus.

According to the website Stanford.edu, the first wave of influenza appeared in the spring of 1918 at Fort Riley, Kan., where new recruits were trained before being sent to Europe to fight in the Great War. As soldiers fanned out to fight the Great War, the virus made its way around the globe. The disease became known as the Spanish influenza because the Spanish news media was the first to widely report the epidemic. The disease was also called grippe, the three-day fever and other names.

The war brought the virus back into the United States in the fall of 1918 for the second wave of the epidemic. It first arrived in Boston in September 1918 through the port, according to Stanford.edu. According to the National Archives, this time the disease was far more severe than it had been in the spring.

By September 1918, newspapers reported that the epidemic of Spanish influenza was sweeping Army and Navy camps in the United States. South Dakota residents were certainly not immune from the effects of the deadly disease as Spanish flu spread across the nation.

Delo Townsend was a young high school math teacher and principal at Langford in 1918. In an interview that appeared in the Sept. 9, 1976, Fort Pierre Times, she said, “Sometime in October, many people started getting sick with this pneumonia type illness – cough, aching bones and high temperatures. Schools had to close. When it got really bad, my school board decided to turn our high school into a hospital.” There were funerals every day, she said. Some took place outside to keep down the spread of the disease.

“Often hardly anybody dared attend the funerals,” Townsend said. According to an article in the Spring 1987 issue of “South Dakota History,” records of McKennan Hospital (now Avera McKennan Hospital) in Sioux Falls reported 173 cases of Spanish influenza in 1918-1919.

“The high death rate severely taxed mortuary facilities in Sioux Falls … Many local doctors were still in military service due to World War I and were unable to return home to minister to the sick. Entire families often fell ill, and the greatest number of stricken people stayed home, with the strongest helping the weakest through the crisis. Still, the hospital became so crowded that beds were set up in corridors and all other areas where space was available,” stated the article by Susan C. Peterson. Newspaper articles listed symptoms of the disease. They included high fever, headache, general soreness, sore throat, cough and inflamed mucous membranes. While the young and elderly are usually hit hardest by such diseases, those ages 20-40 were the hardest hit by the Spanish influenza.

Across South Dakota and the nation, public gatherings were forbidden. Schools, colleges, theaters, churches, pool halls and other public gathering places closed. Advice in the Oct. 23, 1918, Daily Huronite about how to avoid the Spanish influenza included keeping in good condition; getting as much fresh air as possible; avoiding people with colds; not staying in stores longer than necessary; breathing through a clean handkerchief when around people with colds or when in a crowd; and keeping off the main streets in order to avoid contact with people.

An anti-spitting ordinance was enforced in Rapid City to help stop the spread of the disease. People were arrested or fined for spitting on city sidewalks. By the end of 1918, 1,847 people in South Dakota had died of Spanish influenza, according to the South Dakota Department of Vital Statistics. The four counties with the most influenza deaths were Lawrence with 145, Brown with 118, Beadle with 98 and Minnehaha with 95. Some people with Spanish flu died from pneumonia. The total number of deaths from influenza and pneumonia in 1918 was 2,391.

In 1919, there were 700 deaths from influenza in South Dakota. The flu epidemic came to an end by the summer of 1919. An estimated 675,000 Americans had died during the epidemic.